If only my apartment looked this clean right now..

I actually had to restrain myself from getting a f

I slightly changed the shape of my eyebrows last n

White After Labor Day...YAY or NAY?

While I wish I could tell you exactly where to buy

The most perfect dress that ever existed 🖤 : Lo

Fall Patio Season has started ☀️🍁 : And I b

She dresses like me and drives me crazy, but I wou 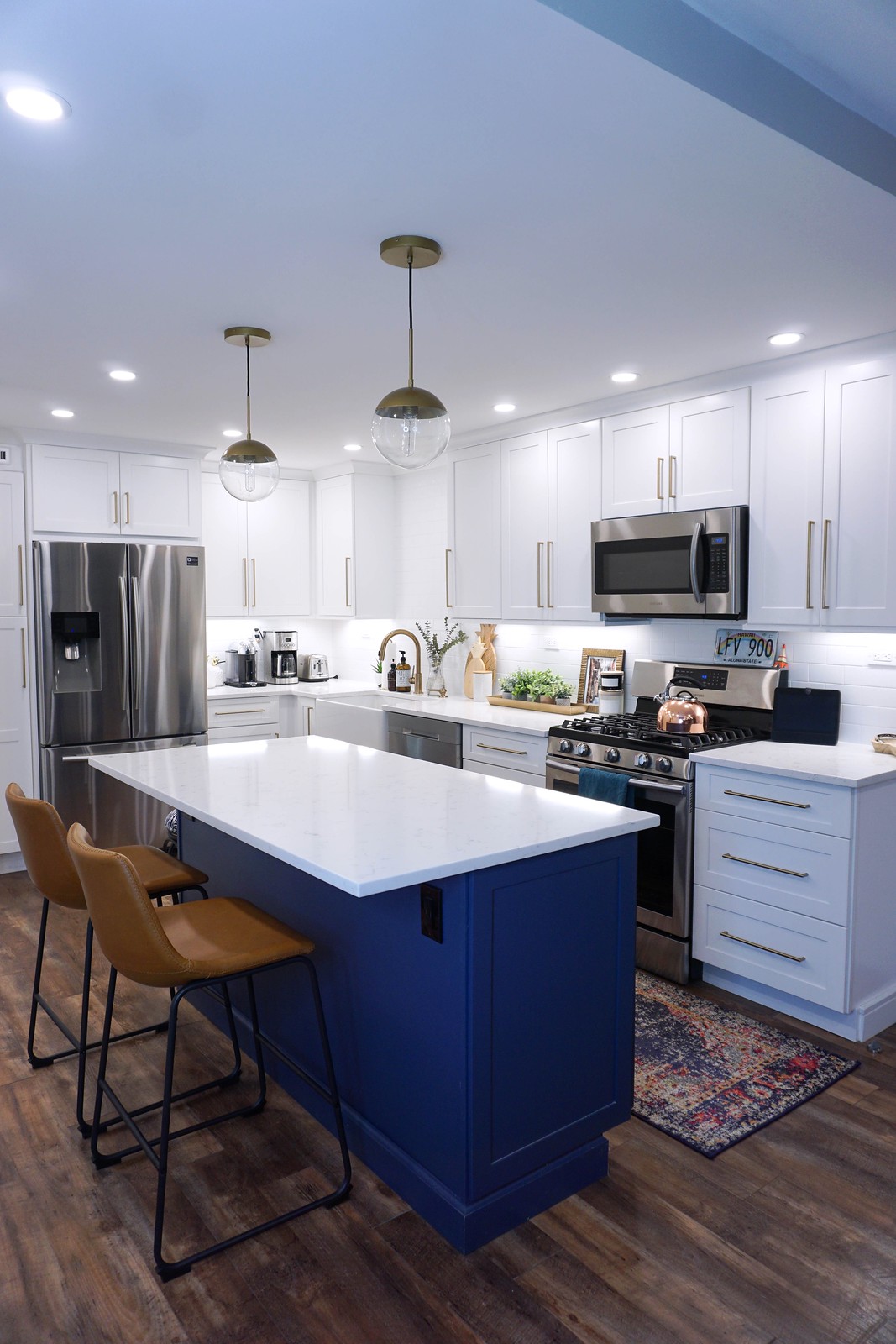 Look at who finally got around to doing a Before & After post on their apartment. This is a very photo heavy post so I’ll keep this brief and let the photos speak for themselves. I just wanted to preface this by saying renovating is NOT an easy or short process. I was lucky enough to not live in the space while I was renovating and had professionals design and perform all the work and it still took about 3 1/2 months to complete the entire renovation of my apartment.

AND I promise to not take forever getting the rest of my apartment posts up! If you’re not following me on Instagram make sure you’re doing that because I’ve been sharing a lot more photos from inside there!

Here are the “Before” photos of my kitchen, I snapped them the day I closed on my apartment! The kitchen was TEENY TINY, old and not functional at ALL! And I would understand the size of the kitchen more if the apartment itself was small and there wasn’t any room for the kitchen to be any bigger, but if you look at the fourth “before” photo you can see that there is a HUGE area of wasted space right outside the kitchen. The previous owner had a small kitchen table there, but the second we saw the space we knew we had to take the wall down and make the kitchen larger. 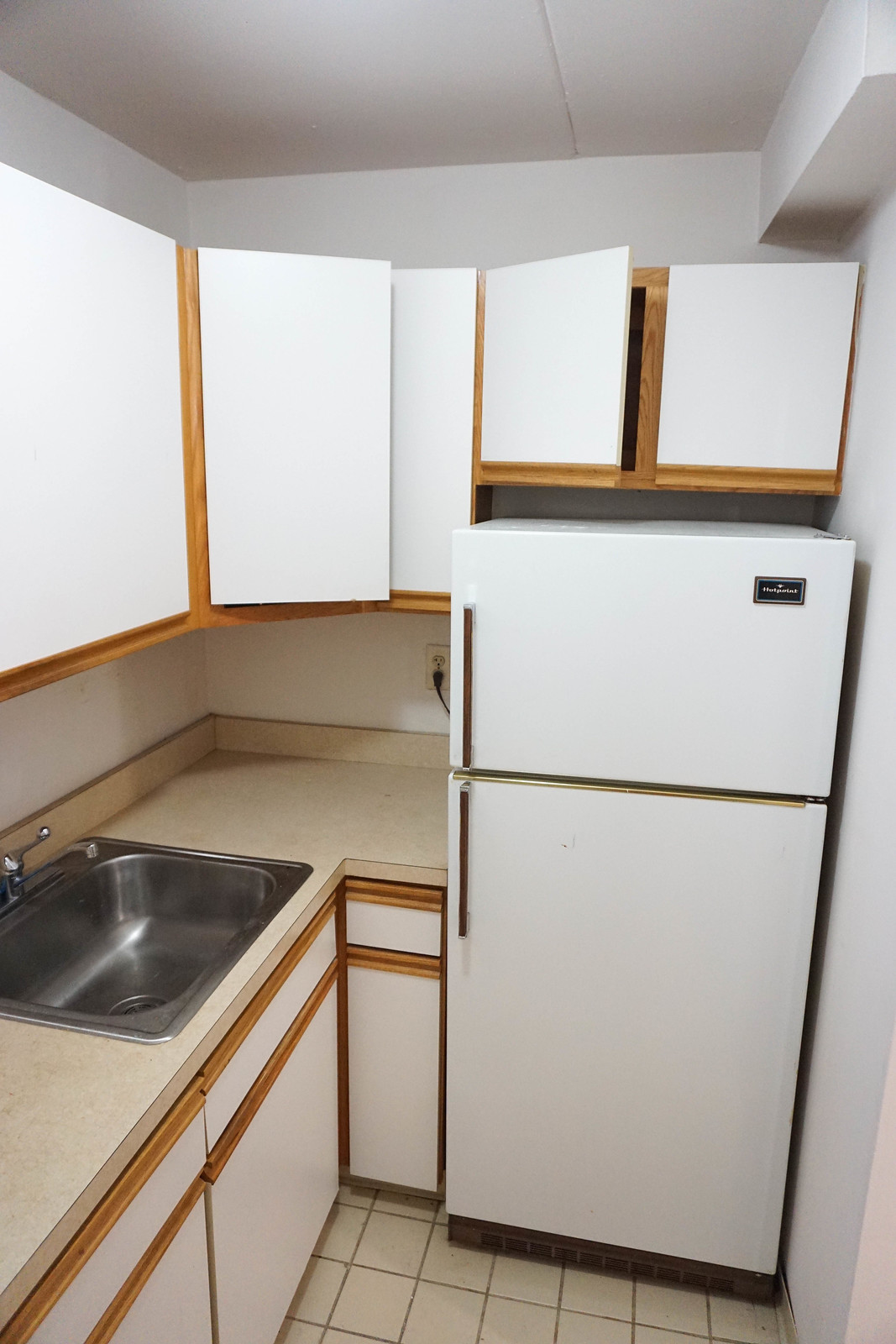 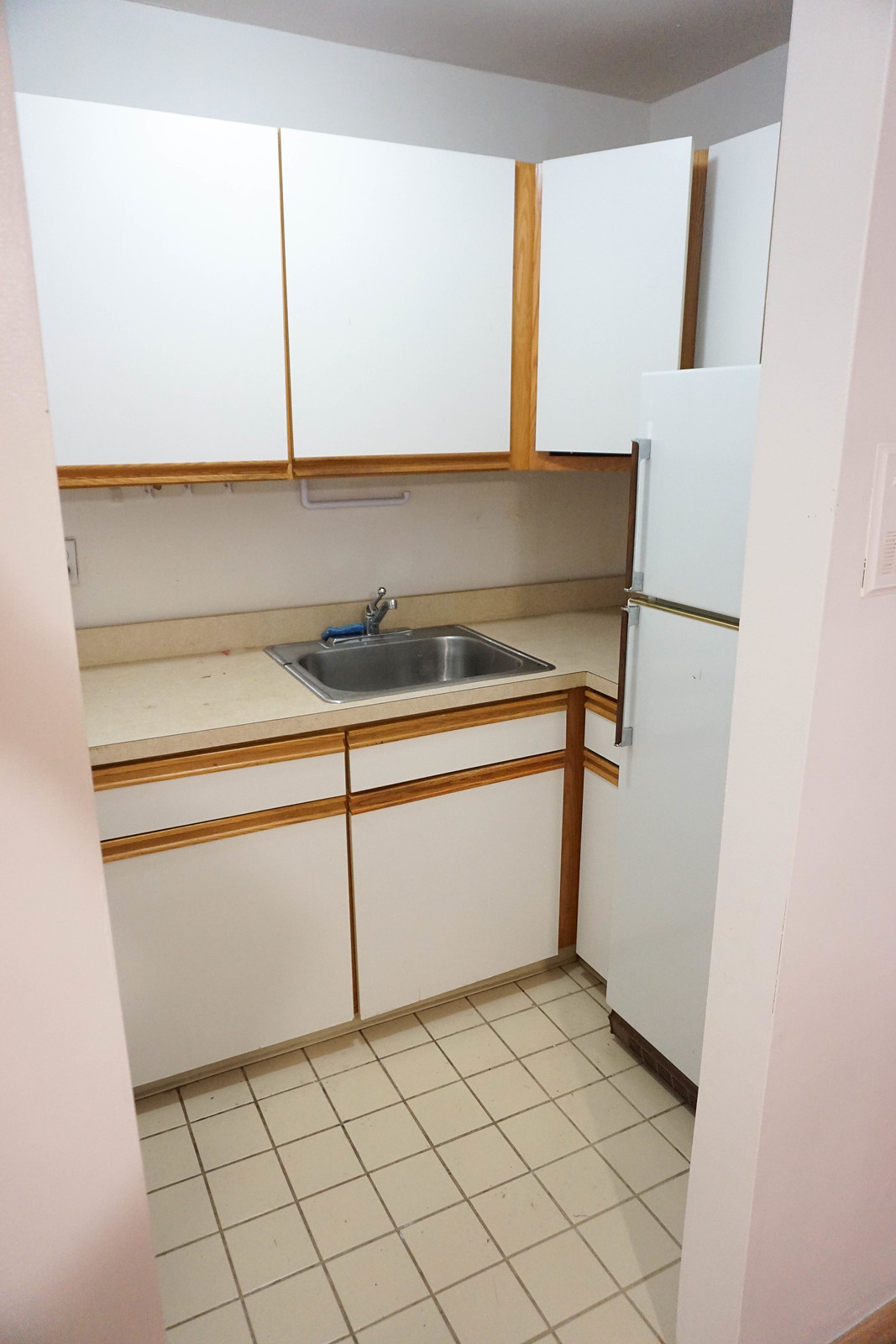 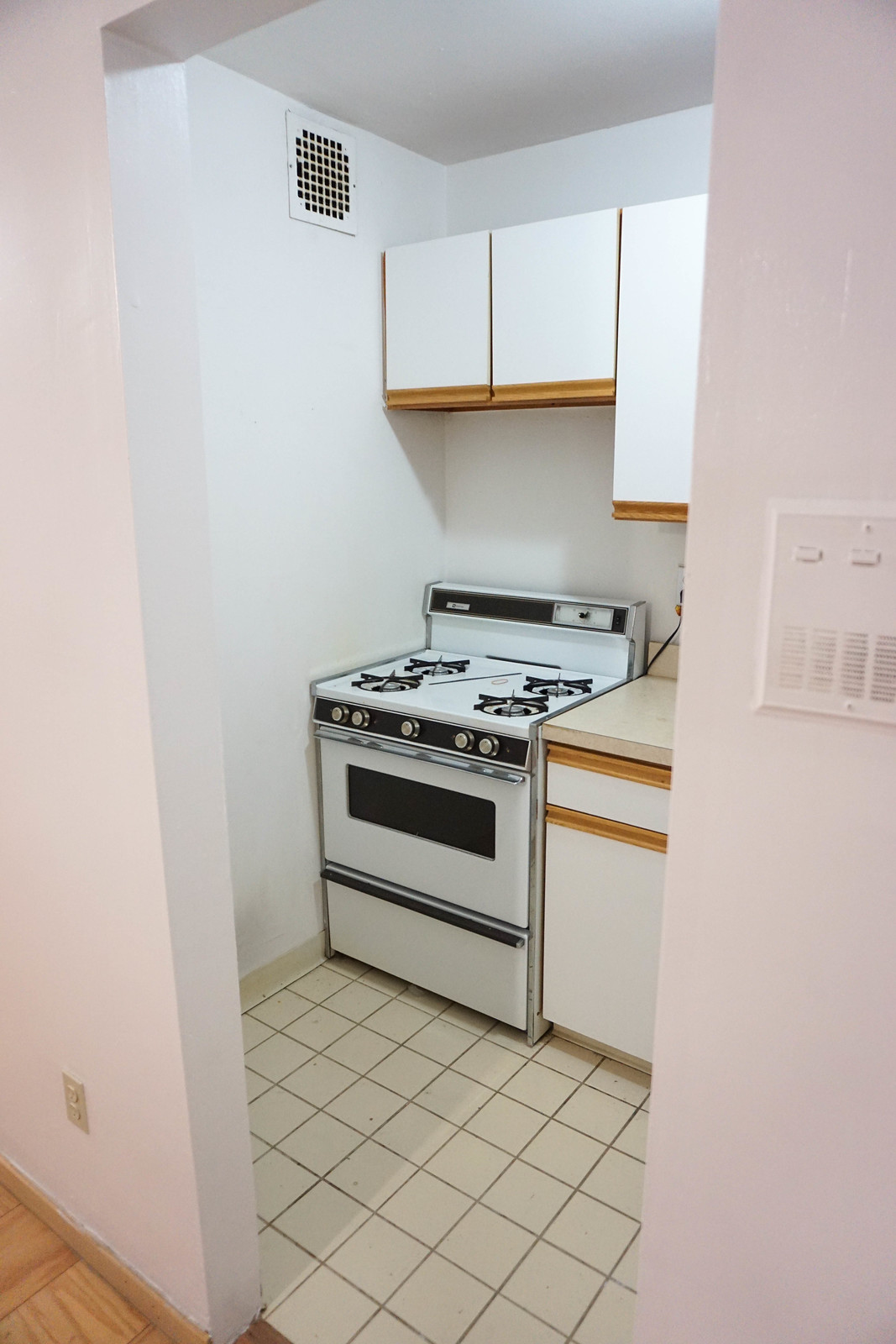 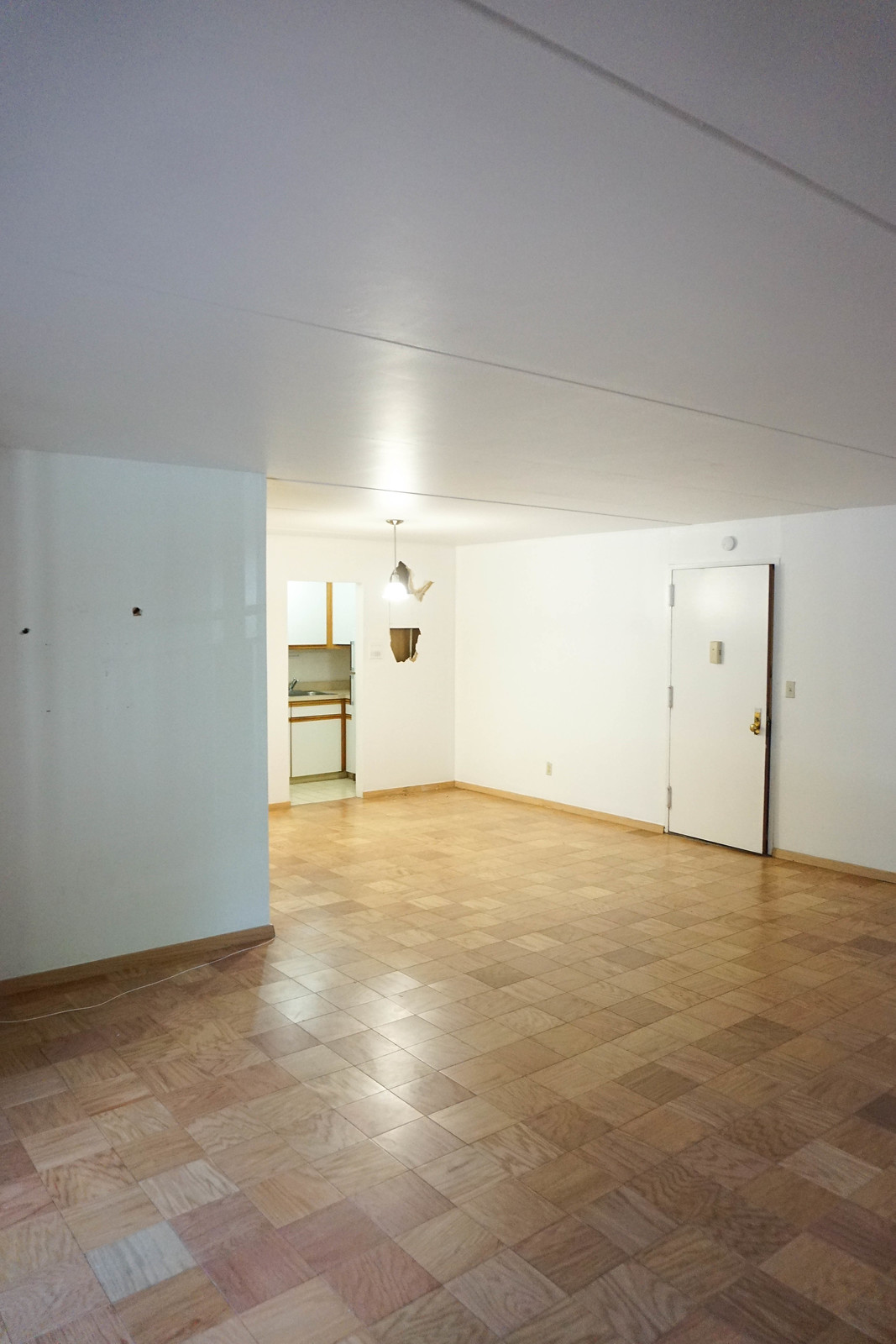 Stage one of my apartment kitchen renovation was taking down the 2 little walls that closed in the kitchen from the rest of the apartment, taking out all the old cabinets and appliances and then marking out the new kitchen layout on the walls and floor. 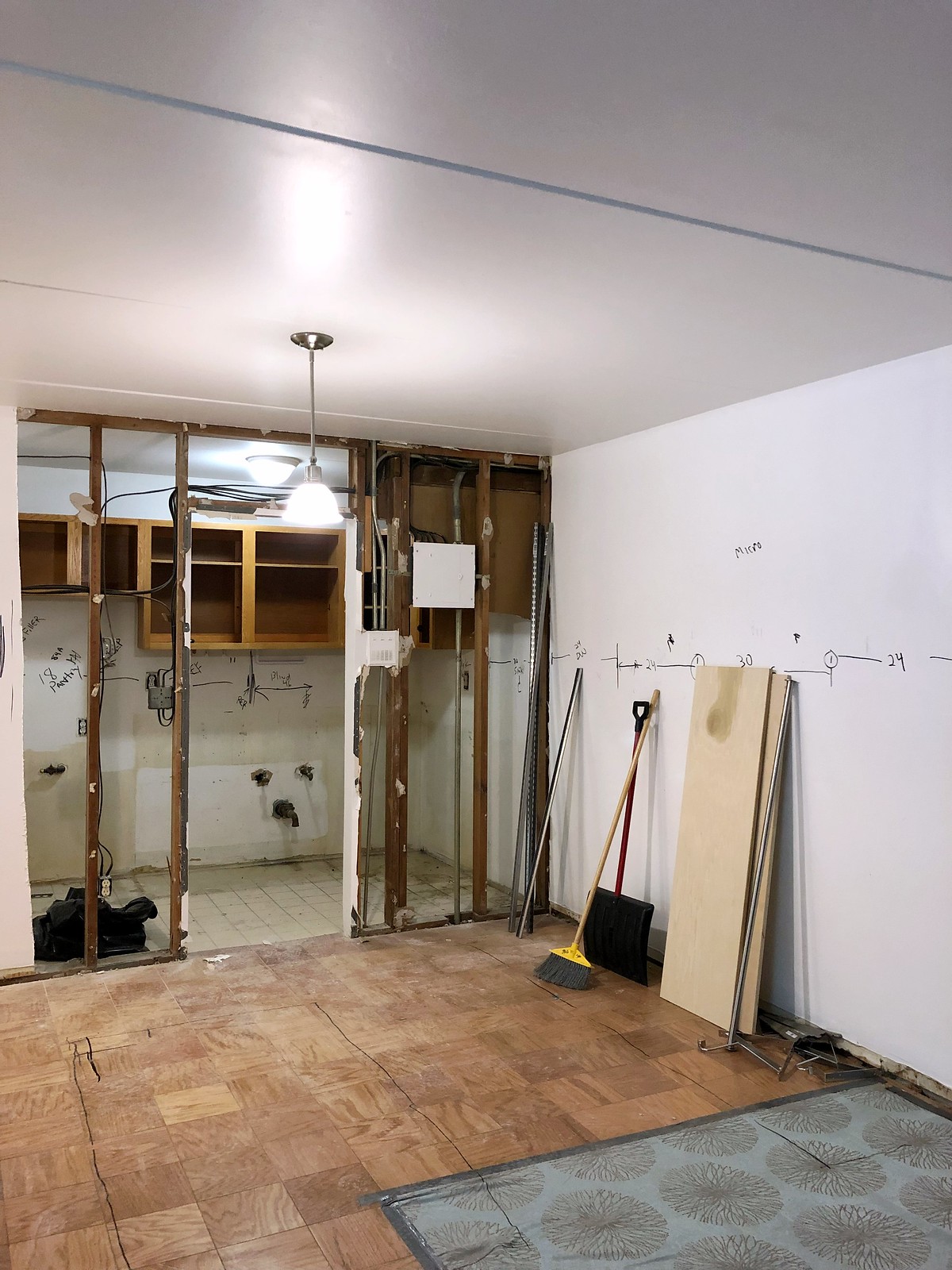 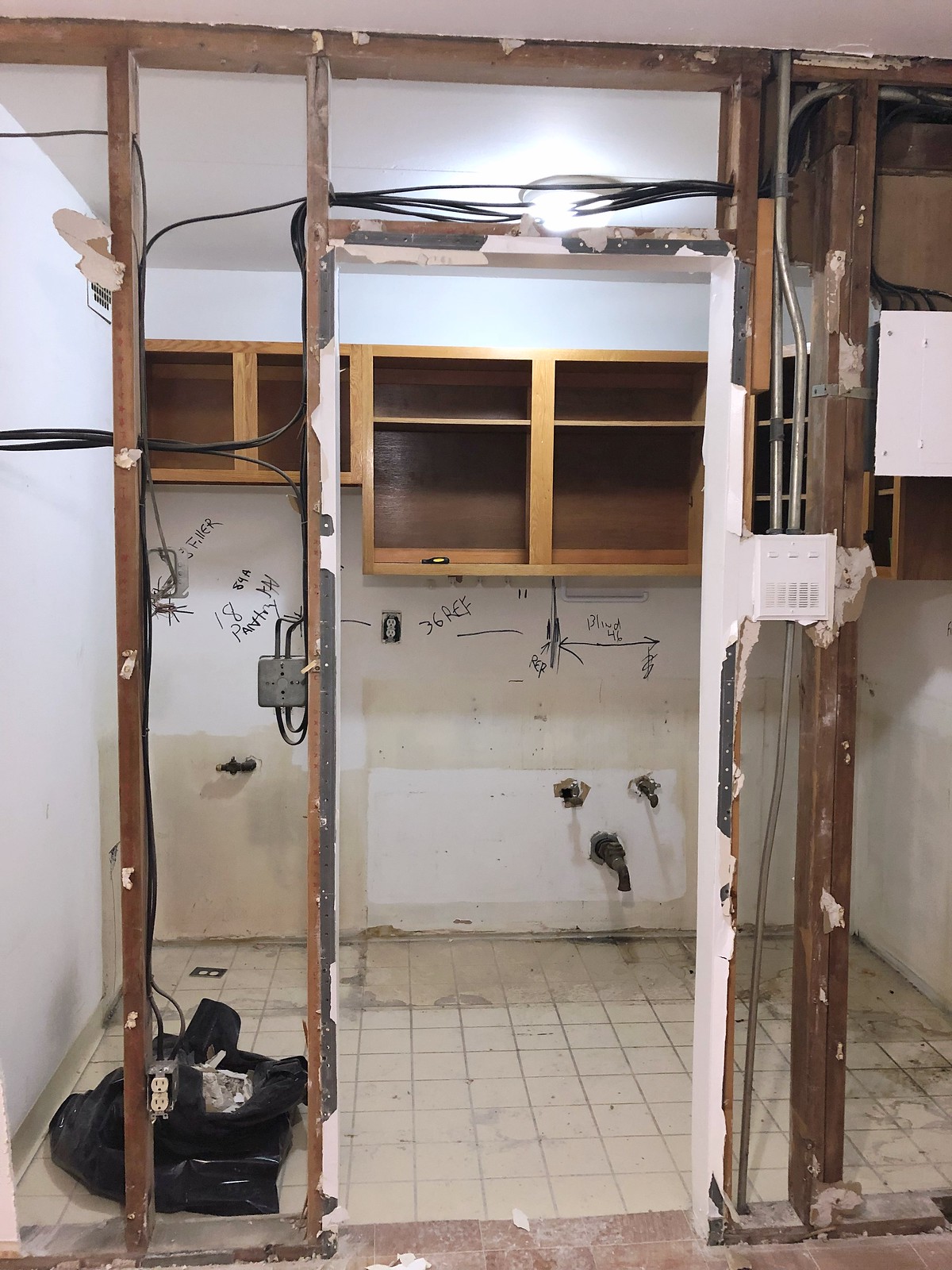 The next step to redesigning the kitchen was figuring out how to add lighting to the area. My apartment is L shaped and this area has no windows as it’s tucked in the bend of the L, AND there were only 2 overhead lights in the whole area so ceiling lights were needed (no one wants a dark kitchen). The biggest obstacle was that the ceiling of my apartment was CONCRETE, which means we couldn’t cut into it to run wires or add any lights.

Thankfully by dropping the entire ceiling a few inches over the kitchen area we were able to run electrical wires and add recessed LED ceiling lights to the whole area. Adding this dropped ceiling also allowed us to move all of the necessary wires to relocate the electrical box.

Not going to lie I didn’t love the idea of dropping the ceiling in the area of the kitchen because my ceilings aren’t that tall as it is (they’re only 8 ft.), but I’m so glad we ended up doing it, it was a necessity! 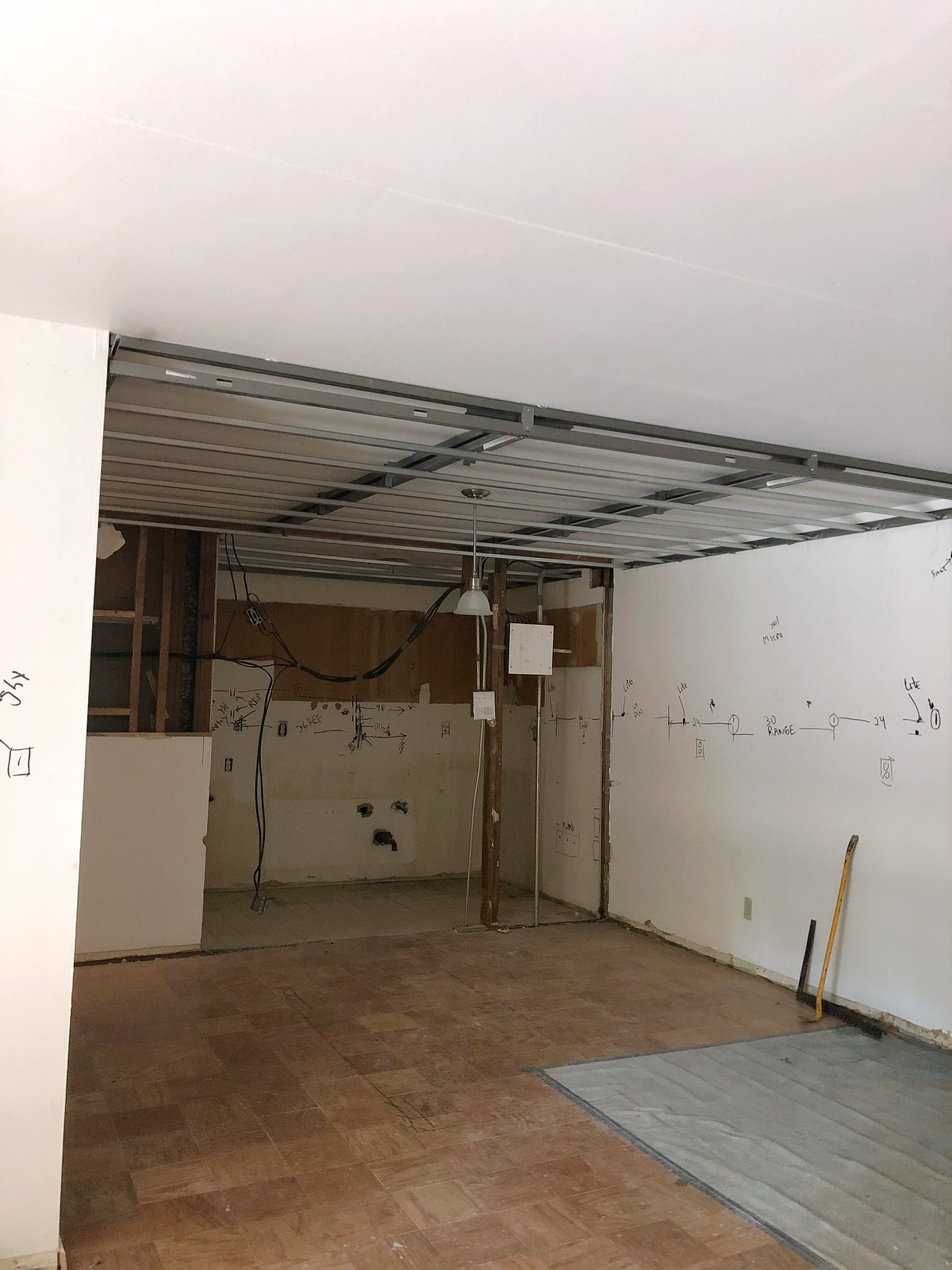 The next stage of my apartment kitchen renovation was coordinating with my building supers to get the power shut off for a little while to move the electrical box from the wall that was being taken down and relocating it to another wall in the kitchen. The electrician also needed to run the wiring in the new dropped ceiling for the recessed lights that would be going in.

Also before the cabinets were installed we needed to figure out what could be done to move the plumbing for the sink from one wall to another. Because you don’t want to use pipes with a severe angle that would obstruct the water flow too much we had to keep the new sink not too far away from the old one, which wasn’t a problem. We also figured out that we would use corner lower cabinet as a dummy cabinet to hide the pipes. 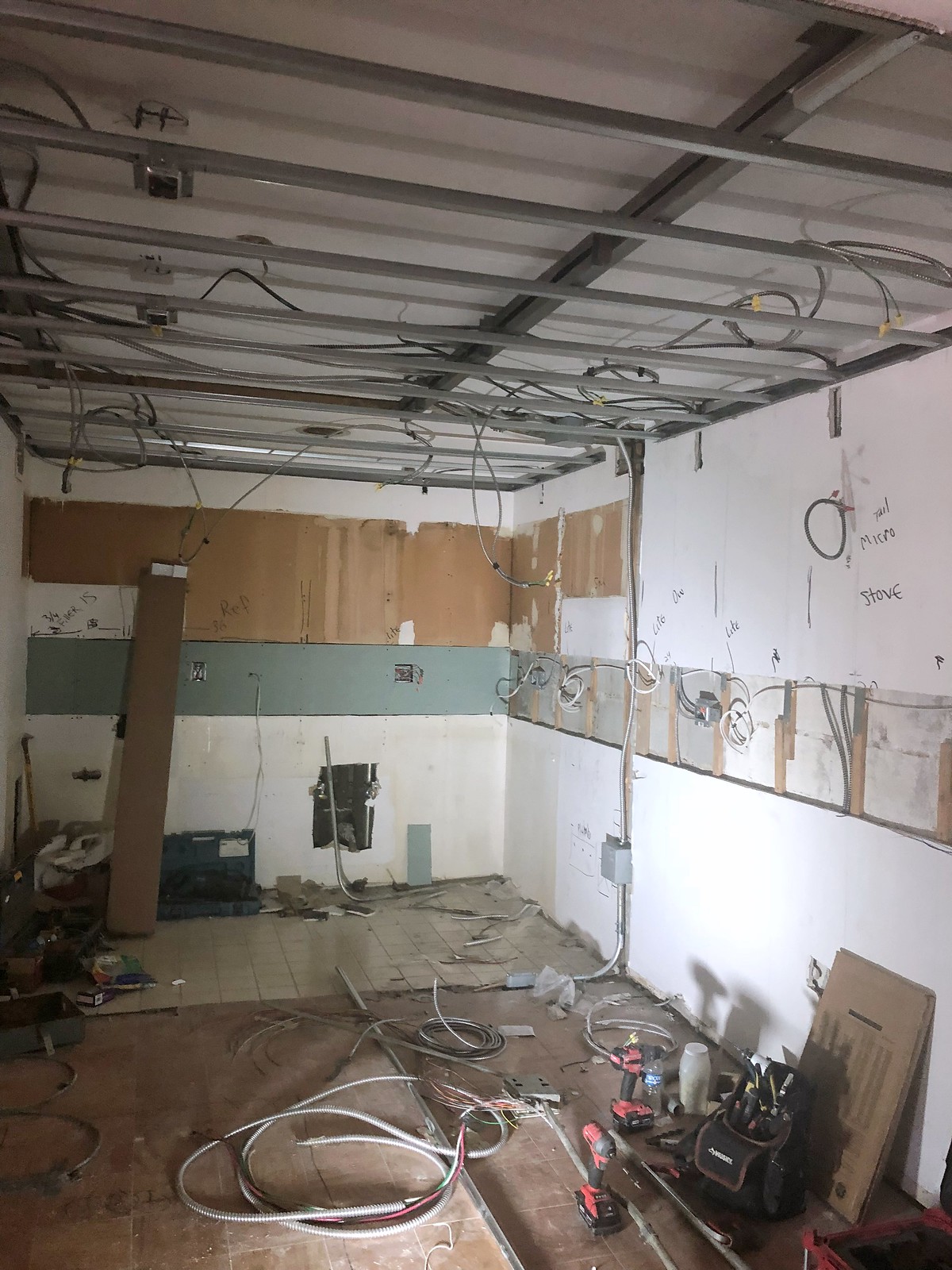 Flooring was installed in the entire apartment followed by closing up the new ceiling and installing all the cabinets, including the island! 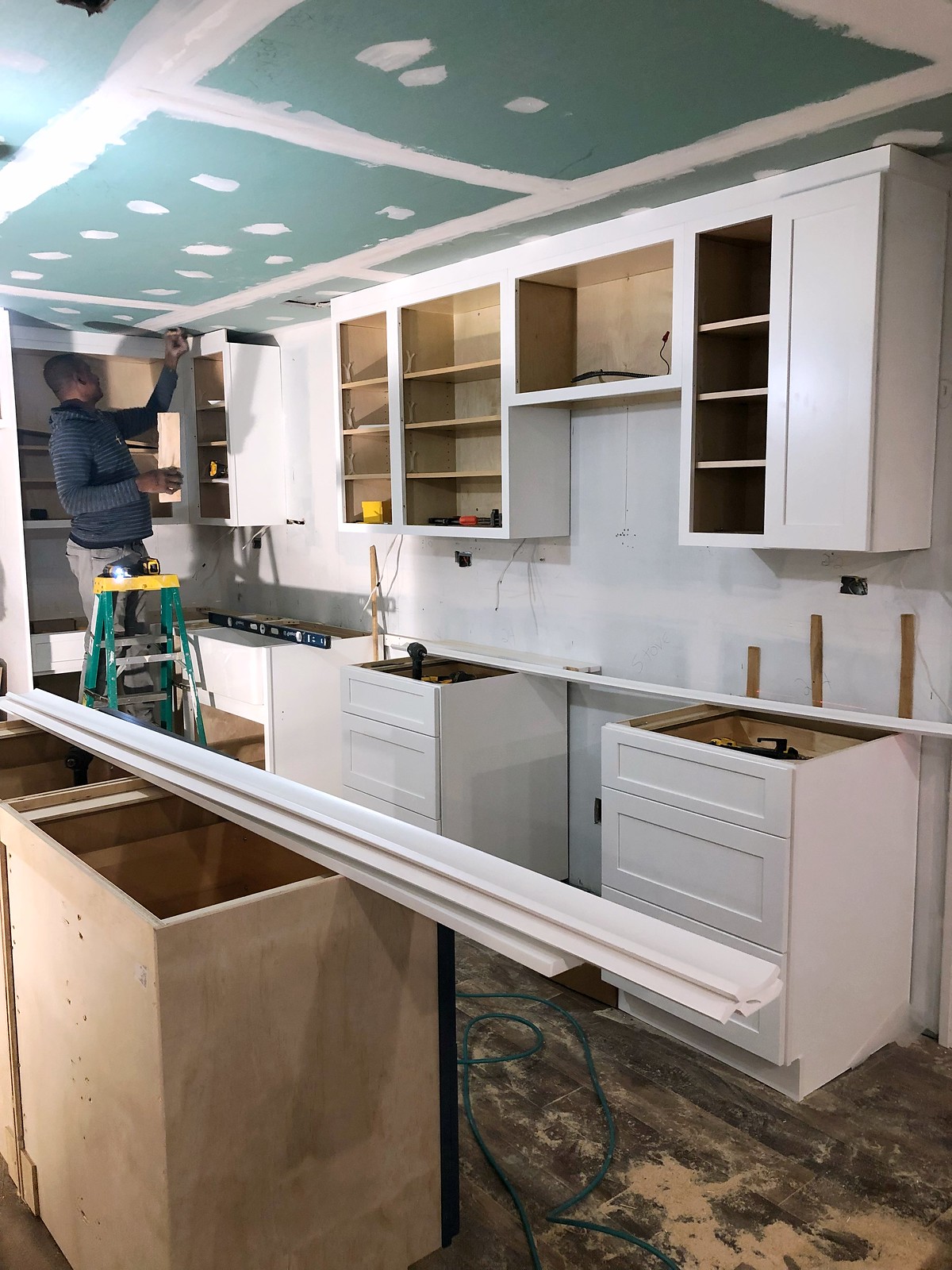 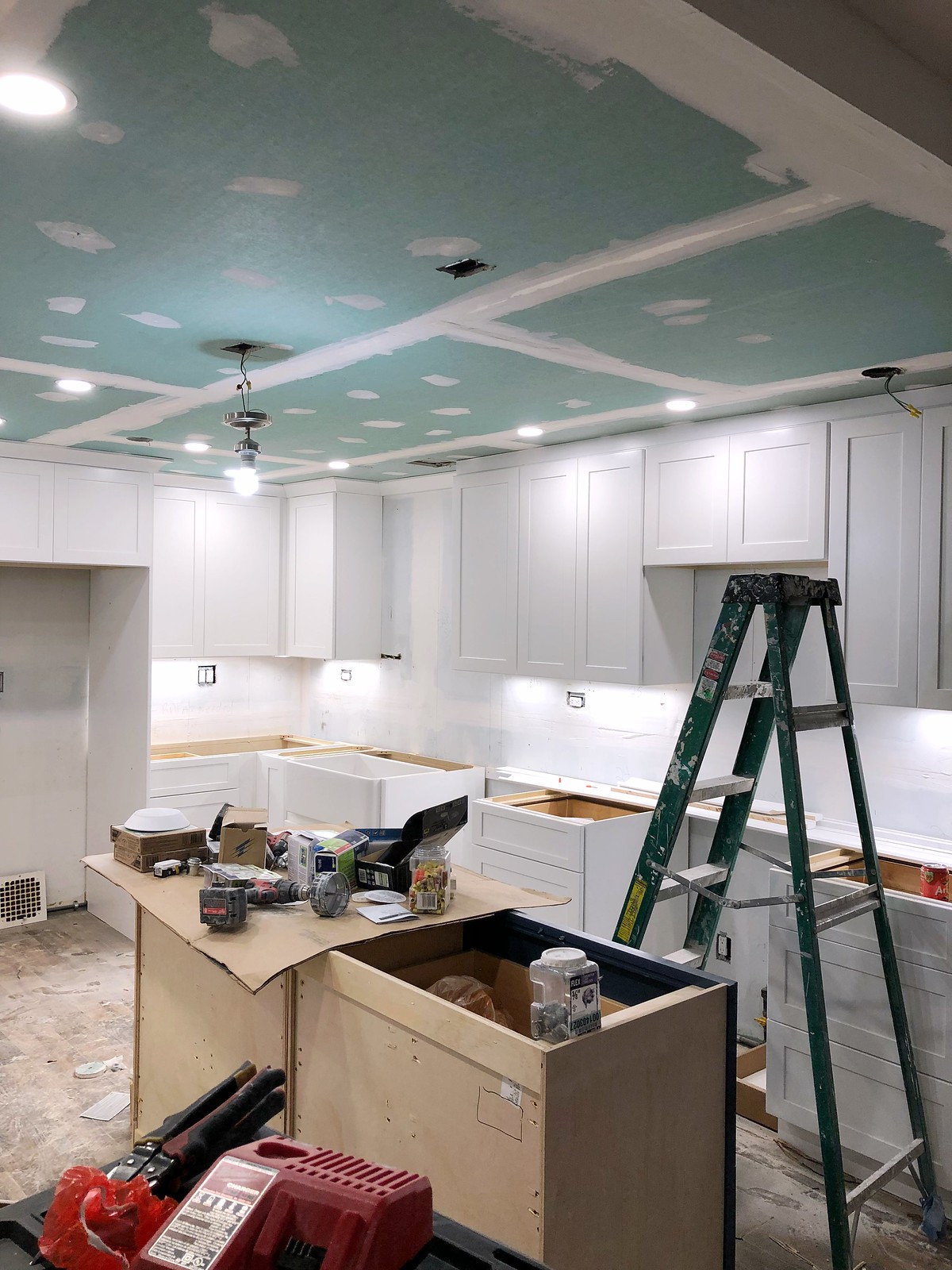 Once all the cabinets were in, the appliances were installed and the recessed ceiling lights were cut out and installed. Then the template for the countertop was completed. 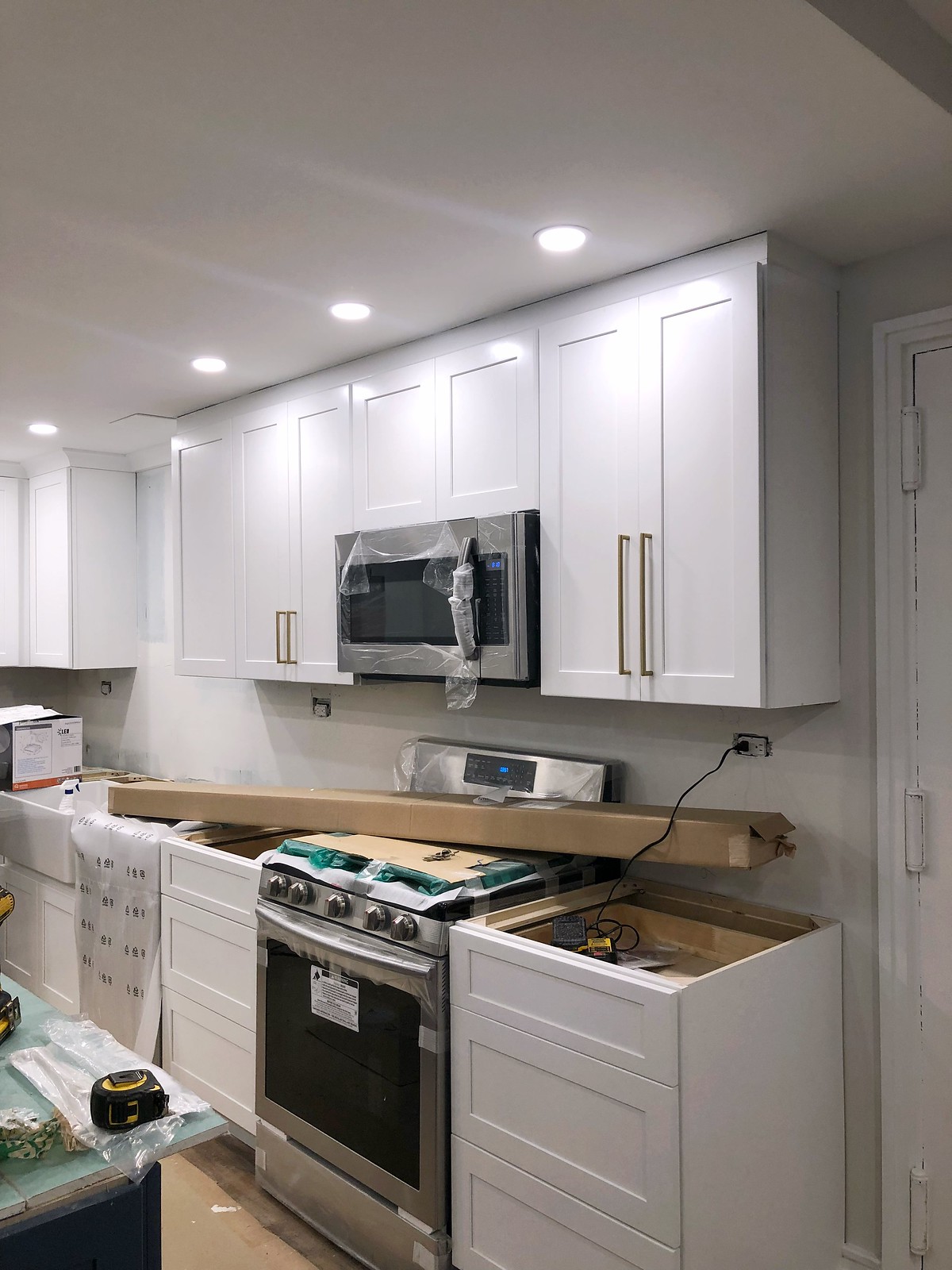 The last step of my apartment kitchen renovation was installing the faucet and the subway tile backsplash. I went with just a classic subway tile with white grout because I wanted to keep the kitchen more basic and easily sellable. 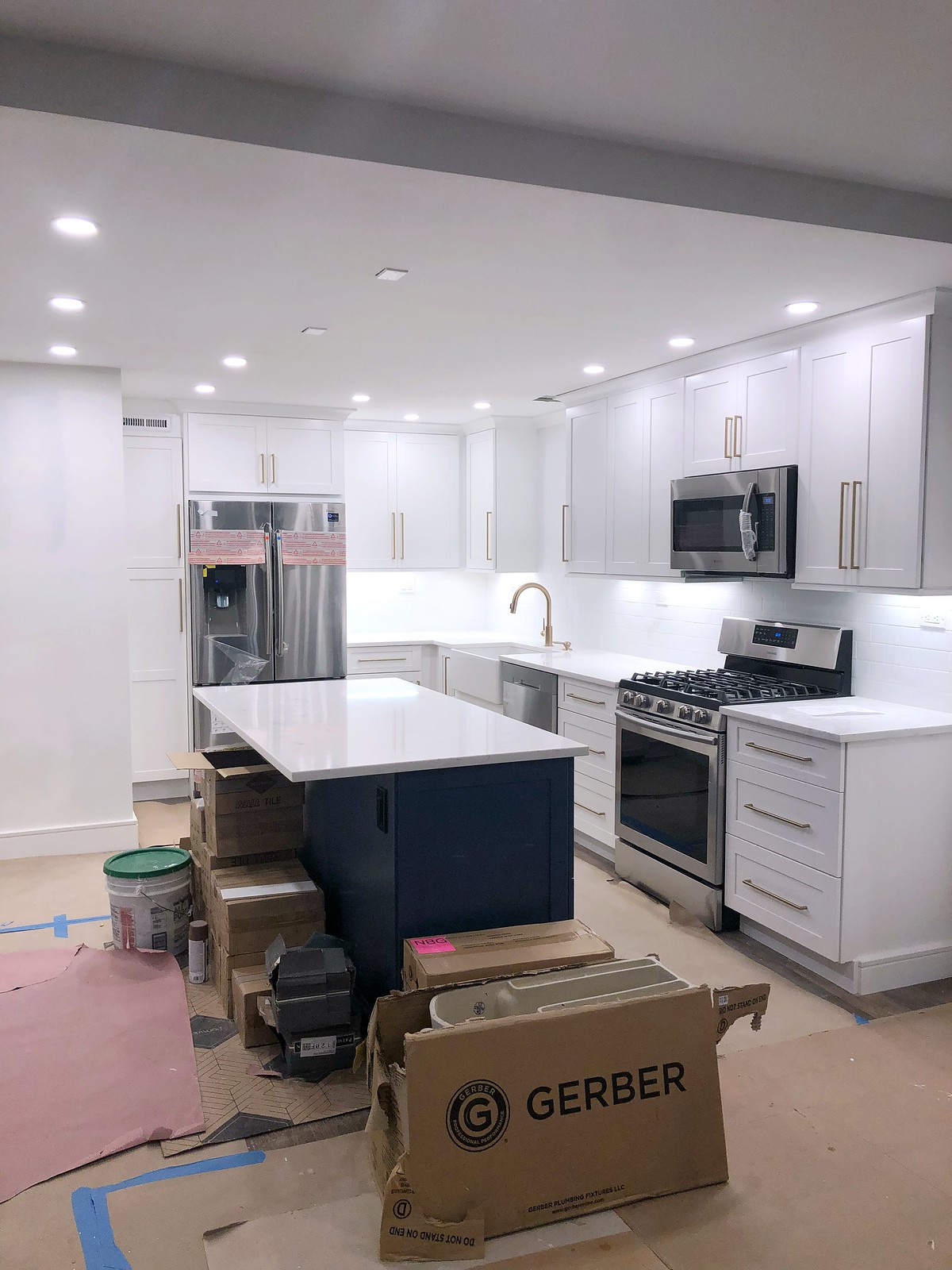 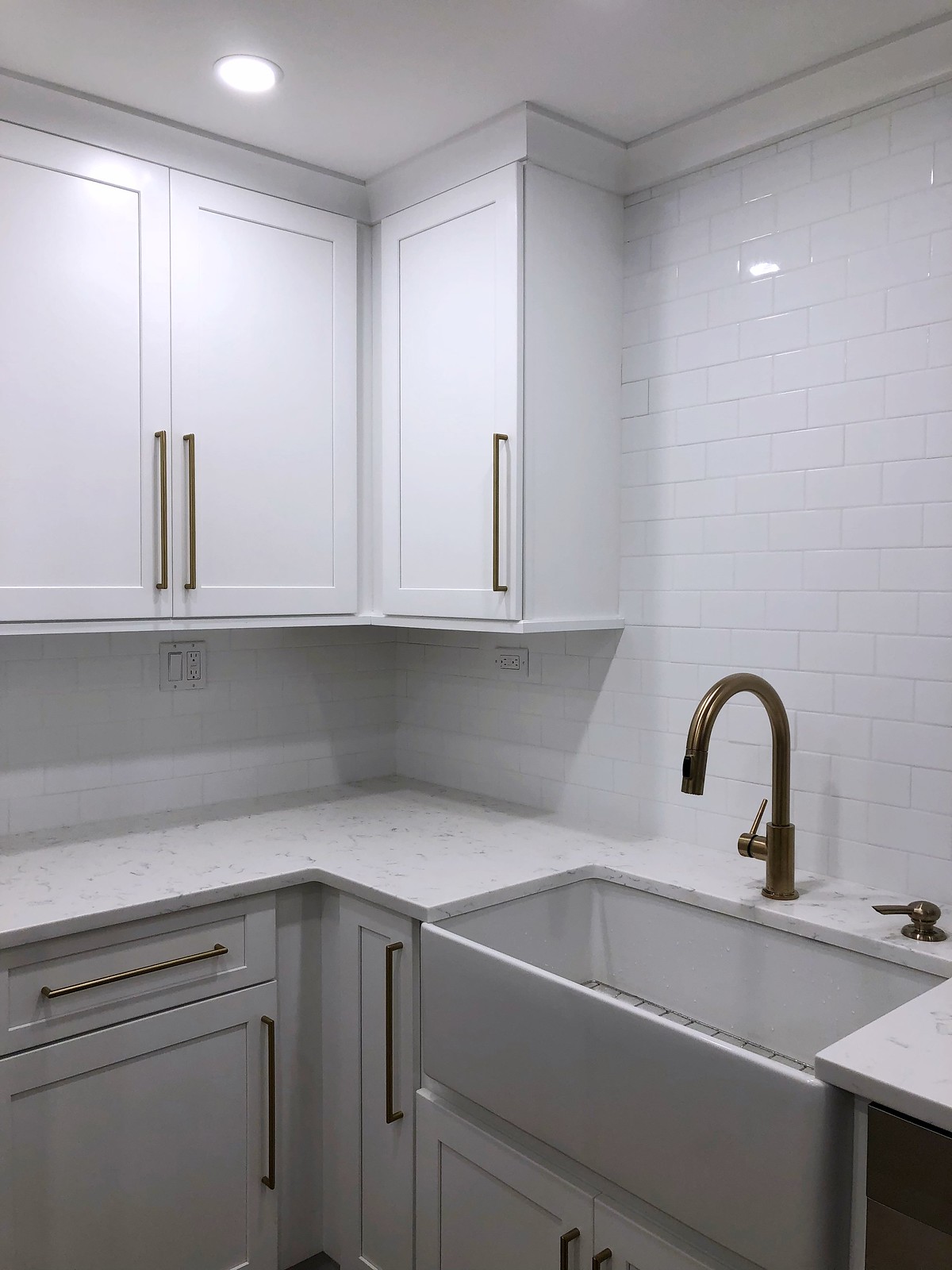 The last time I shared the “after” photos of my apartment last year the kitchen was missing a few crucial items. Since I’m the WORST at making decisions I lived without kitchen island pendant lights for a year simply because I couldn’t make a decision on them. I also still hadn’t decided on stools (these were a hand me down from my mom so I had something) and didn’t have runner yet. 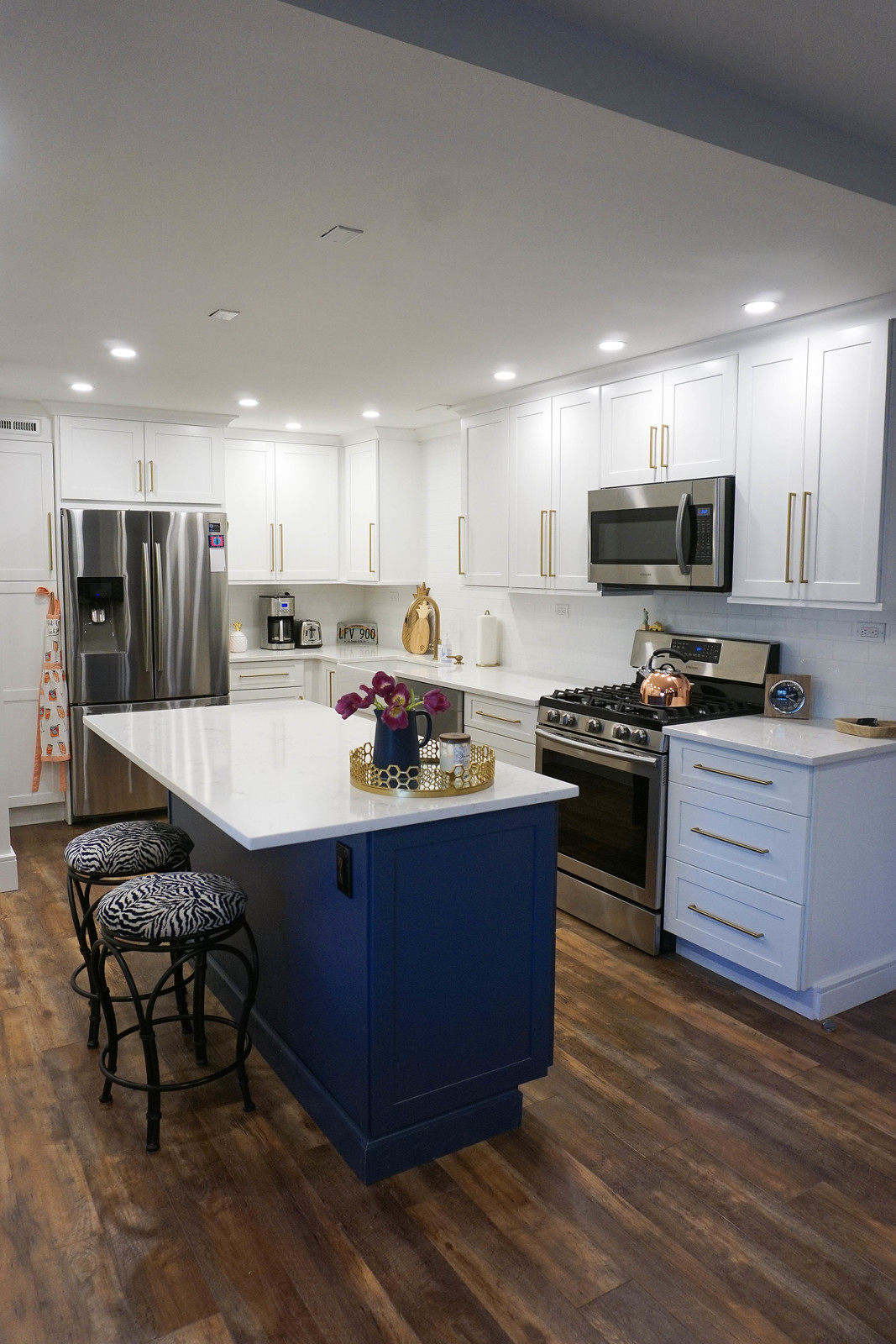 In the past year I’ve finally settled into my apartment, adding pendant lights, a kitchen runner and FINALLY buying new bar stools. Are these the final “after” photos? No, I’m always changing things up, but it’s way more “done” then it’s every felt! 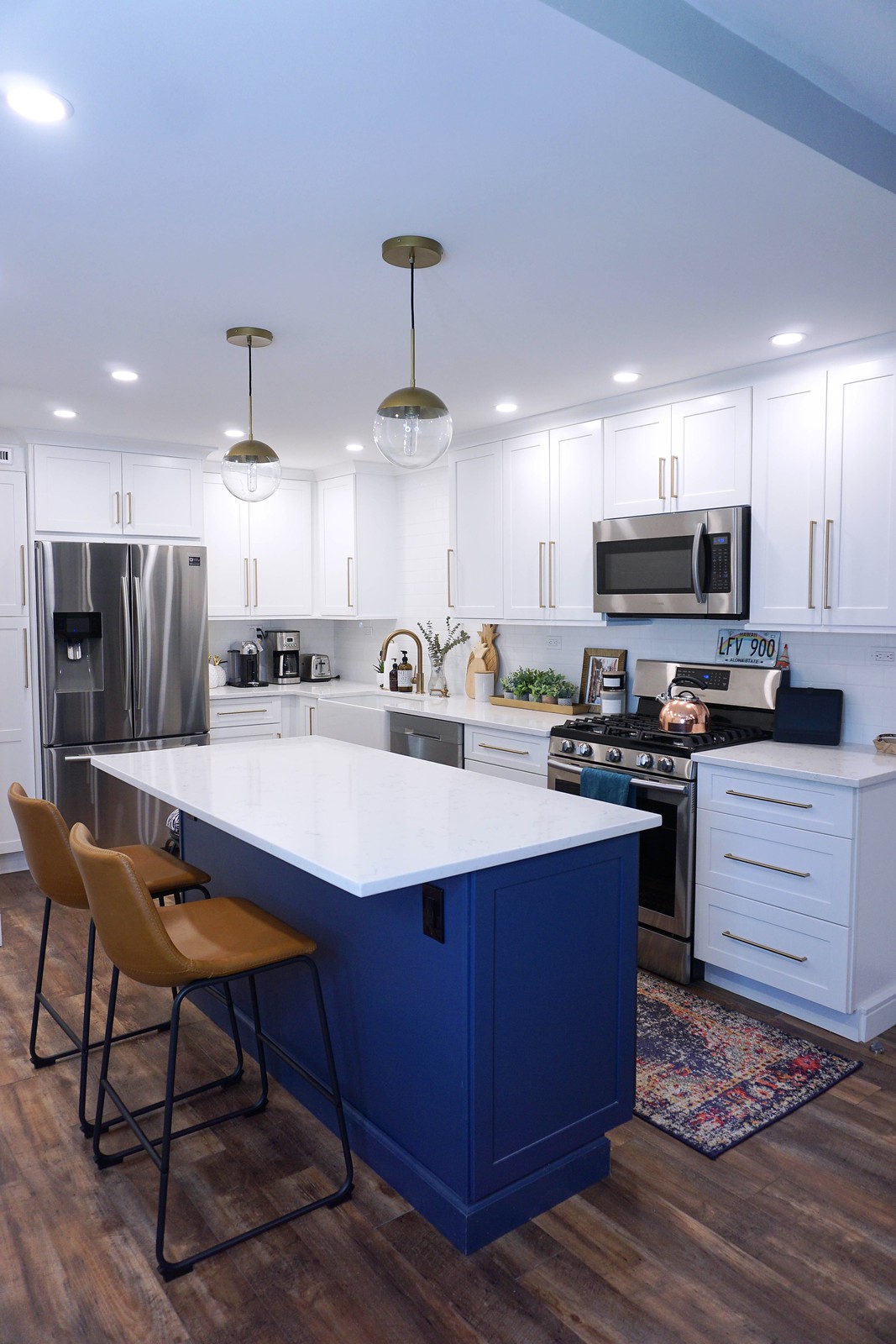 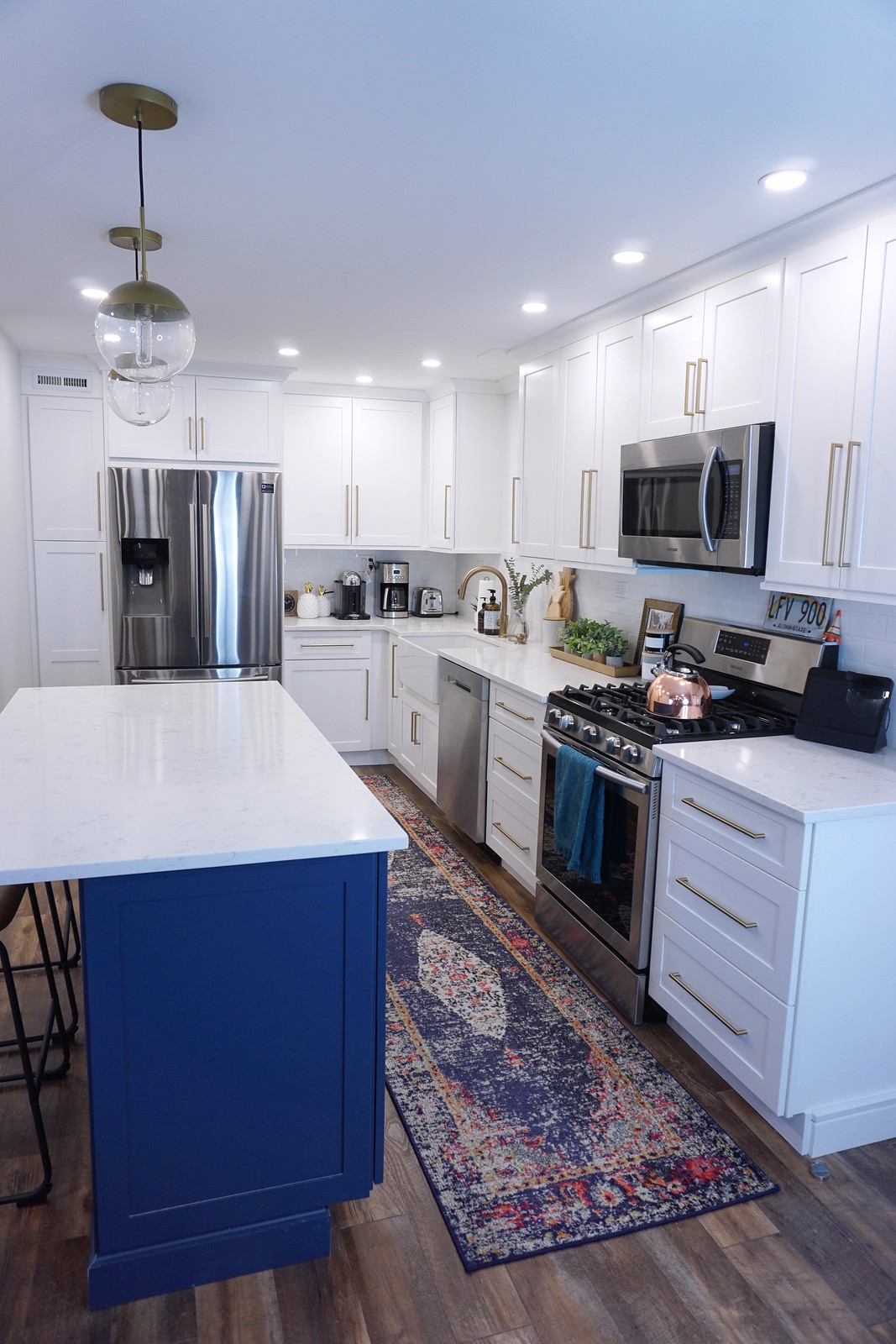 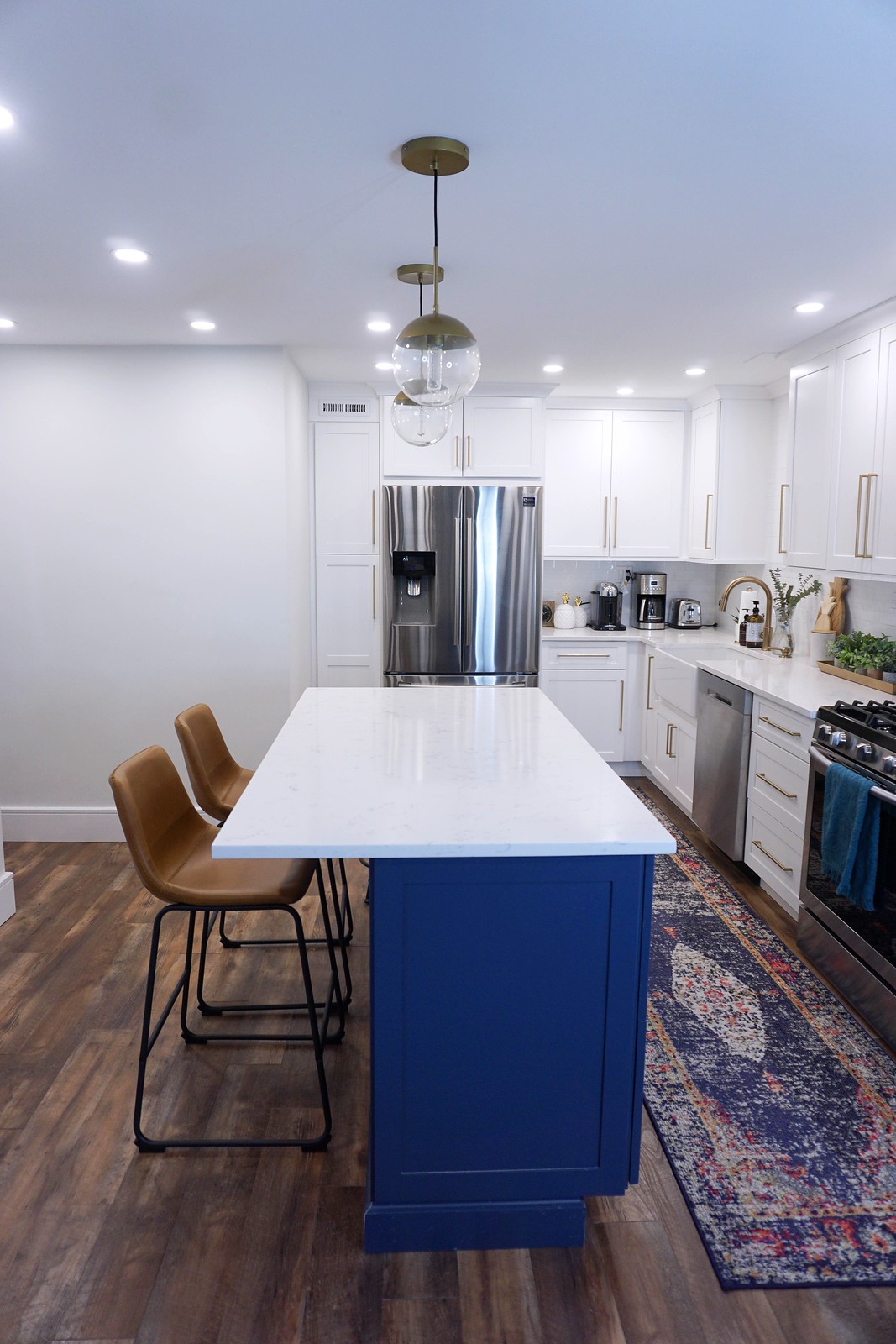 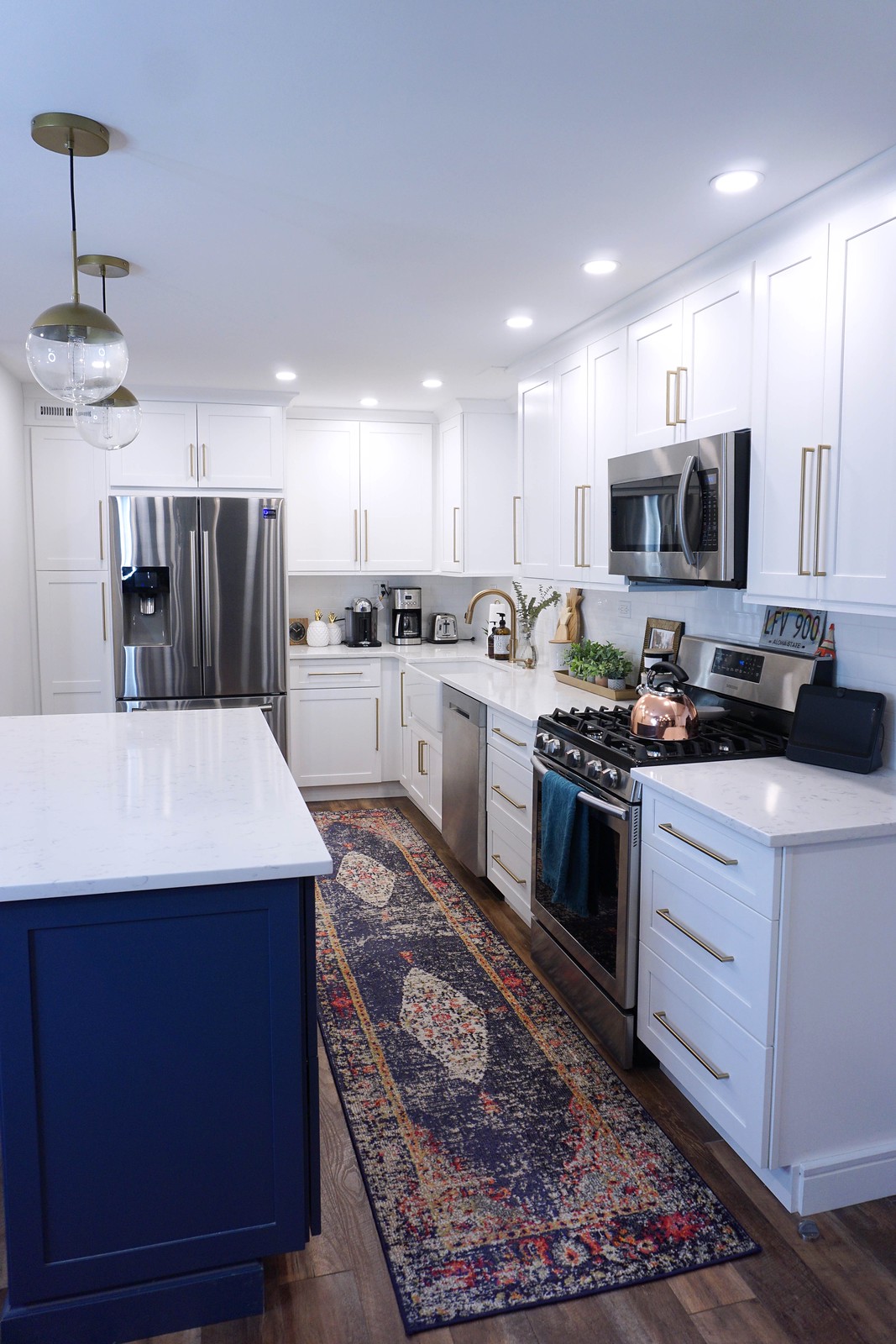 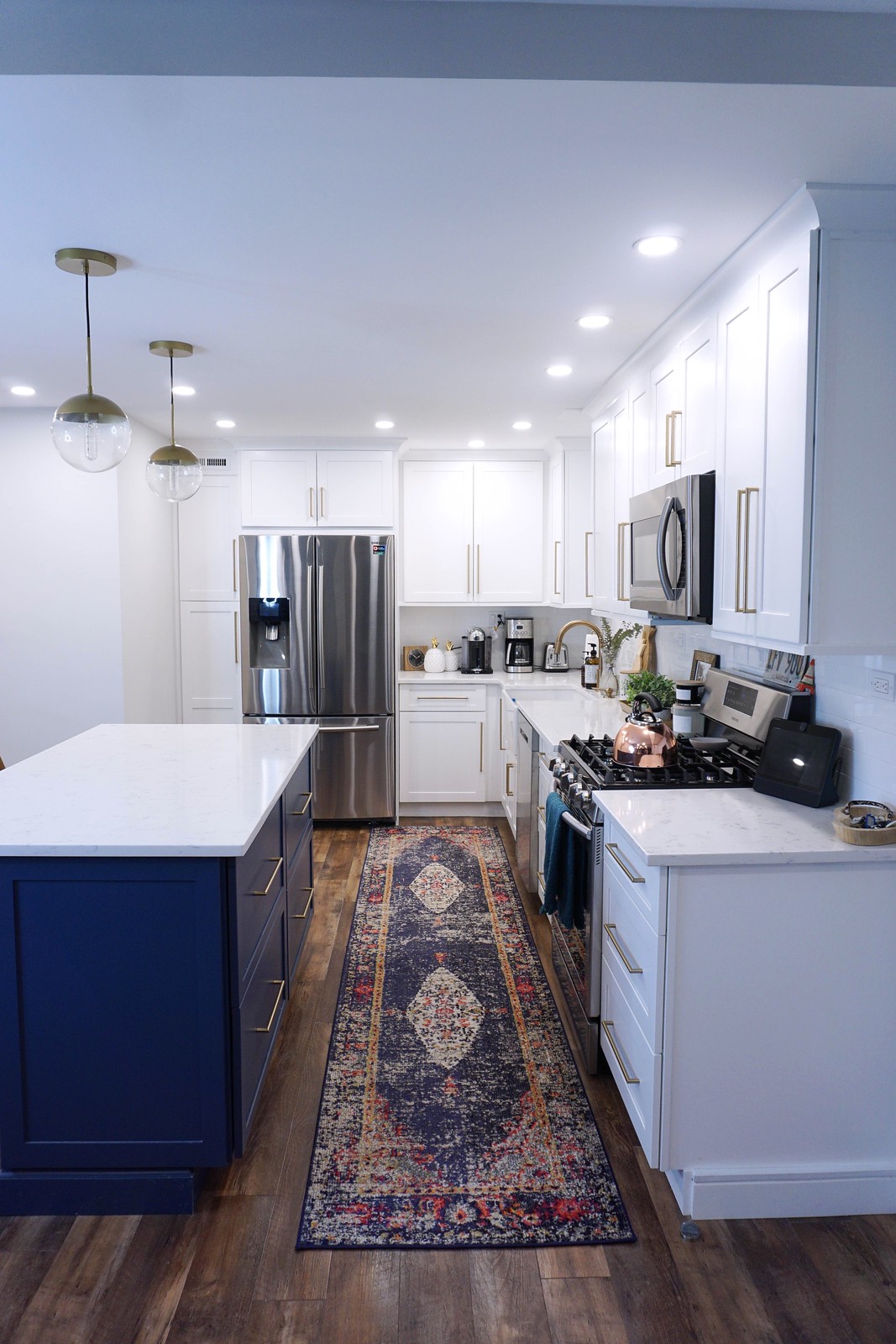 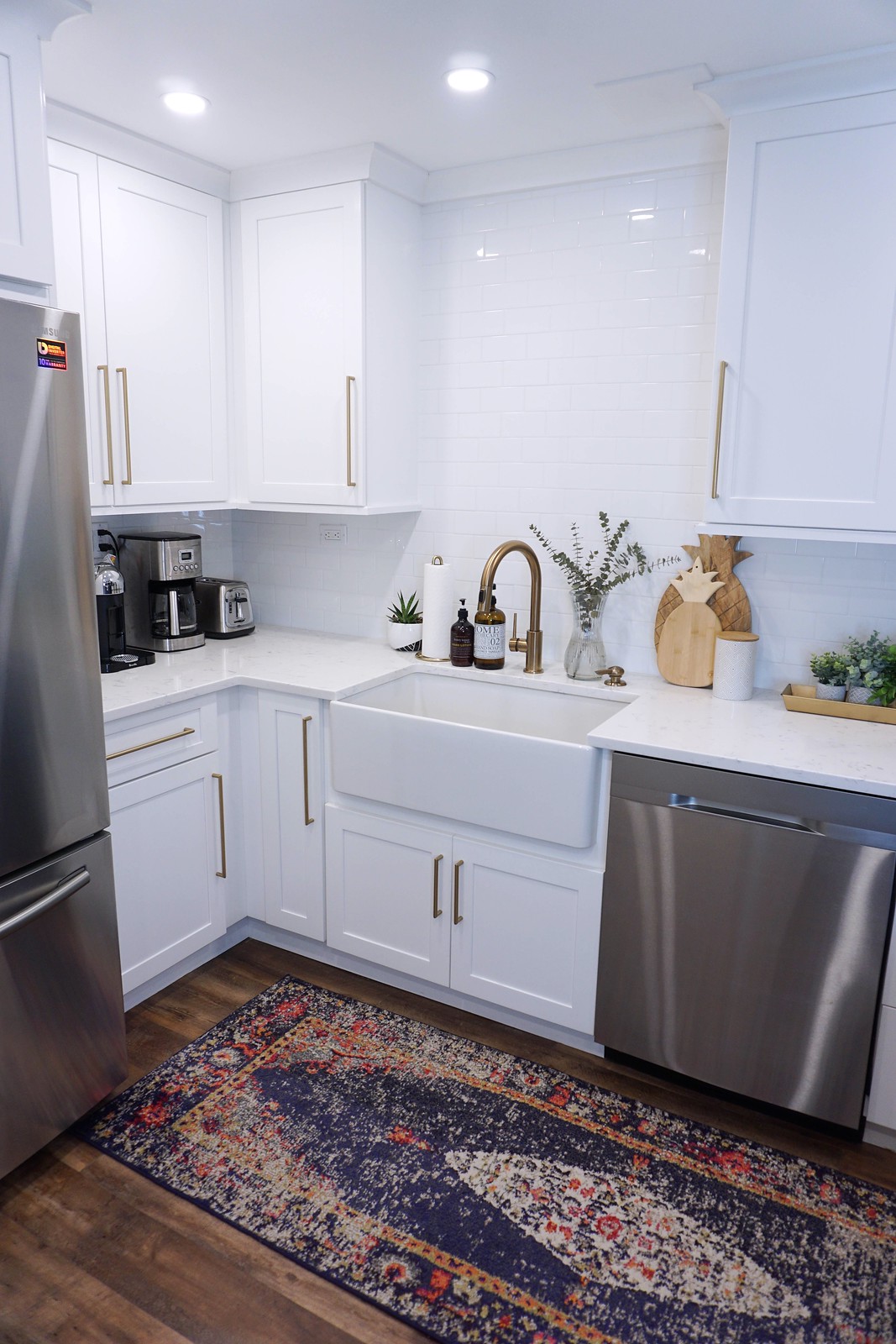 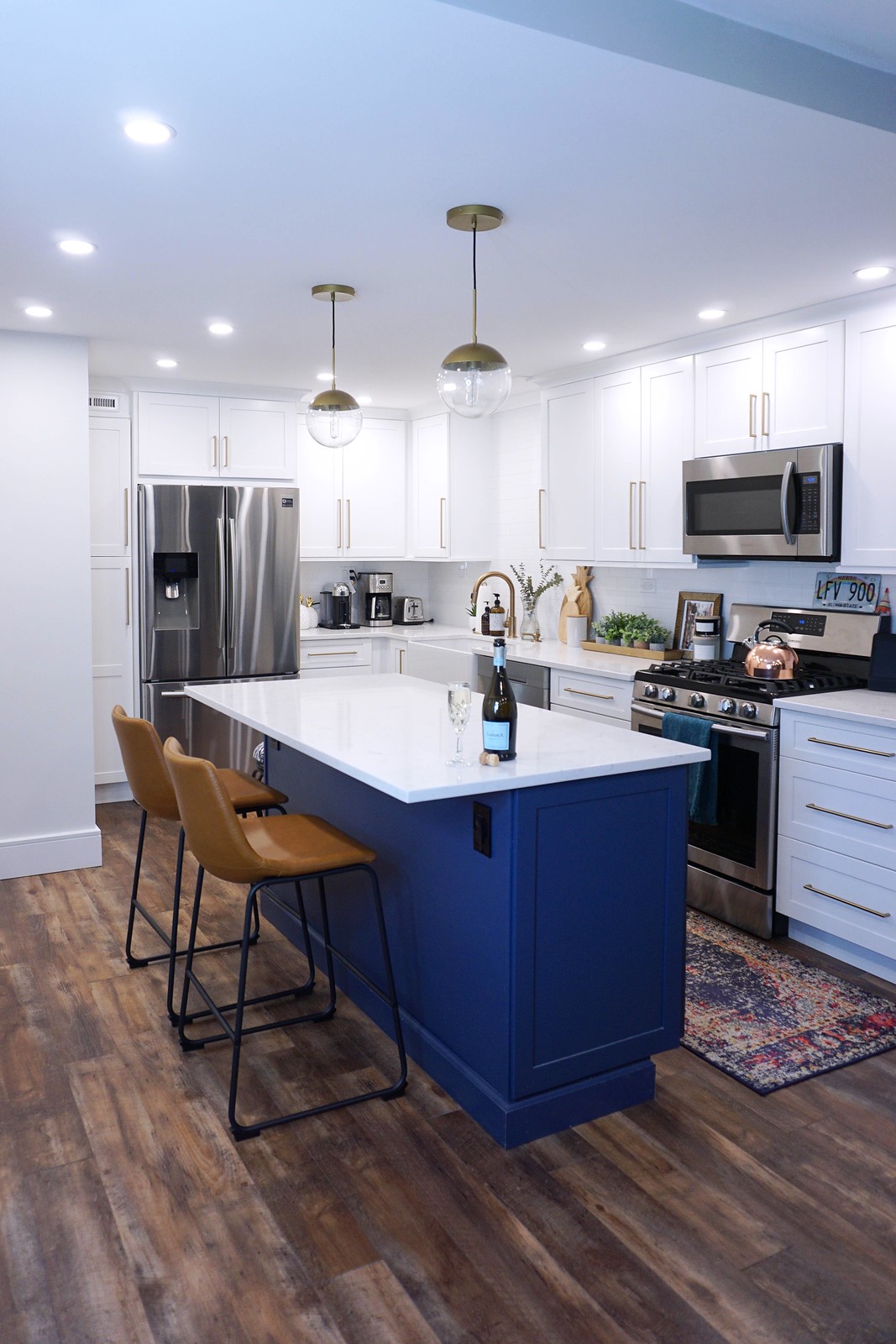 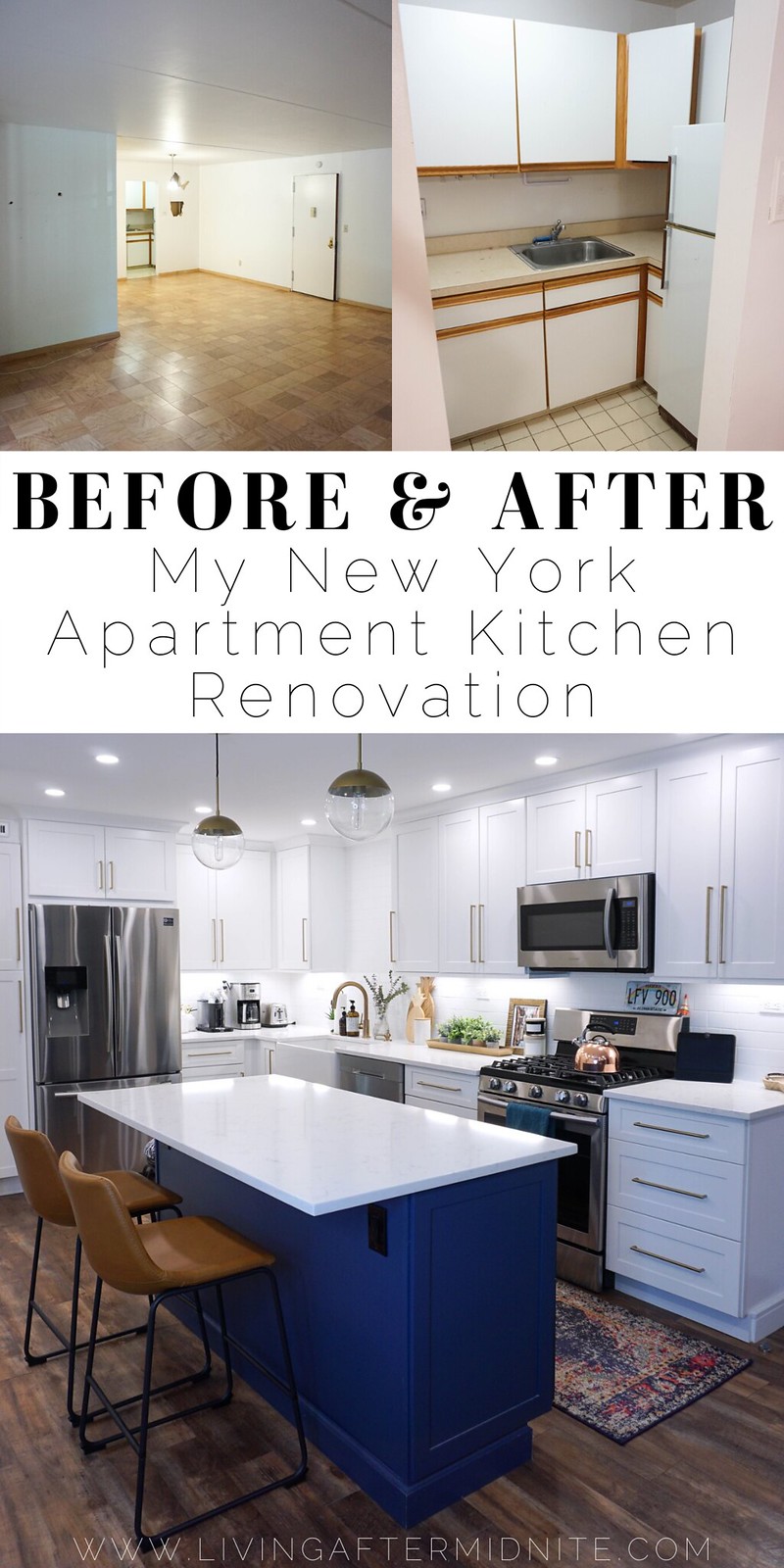 Check out more posts about my Apartment Decor & Renovation here:
Before & After: Feminine Chic Bedroom Renovation
5+ Practical Tips for Designing a Small Bathroom
My Entire Apartment Renovation AFTER Photos!
I’m Officially a Homeowner + My New Apartment BEFORE Photos 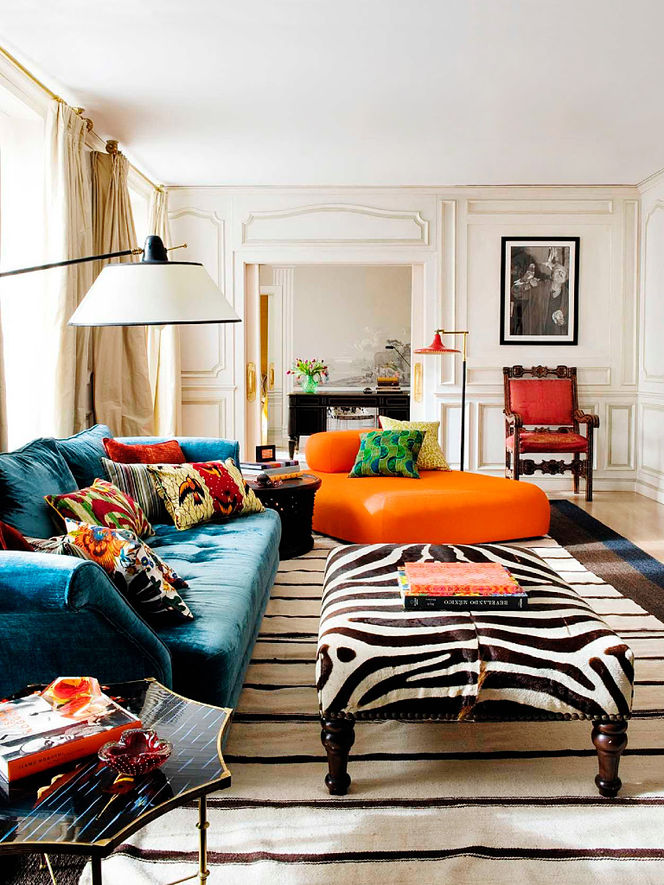 Why You Should Paint Your Walls a Neutral Color 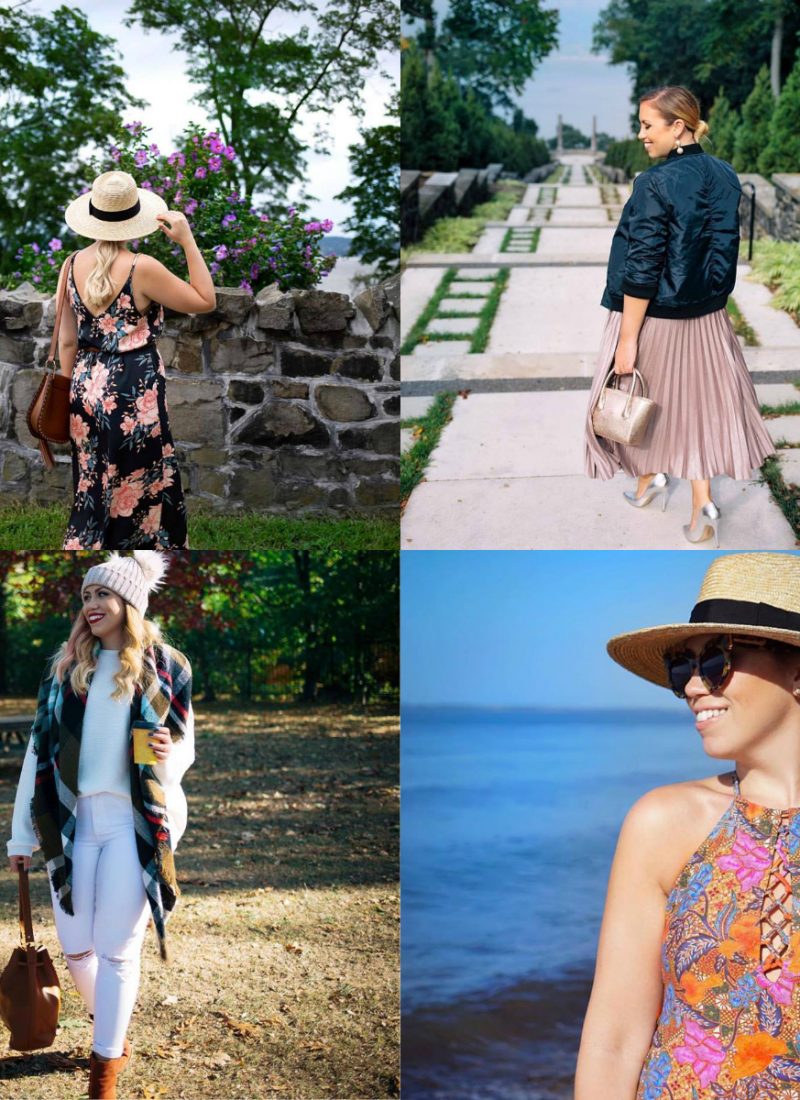 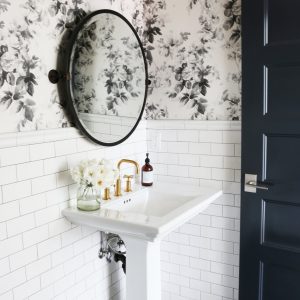 25 Wallpapered Bathrooms That Will Make You Want to Redecorate 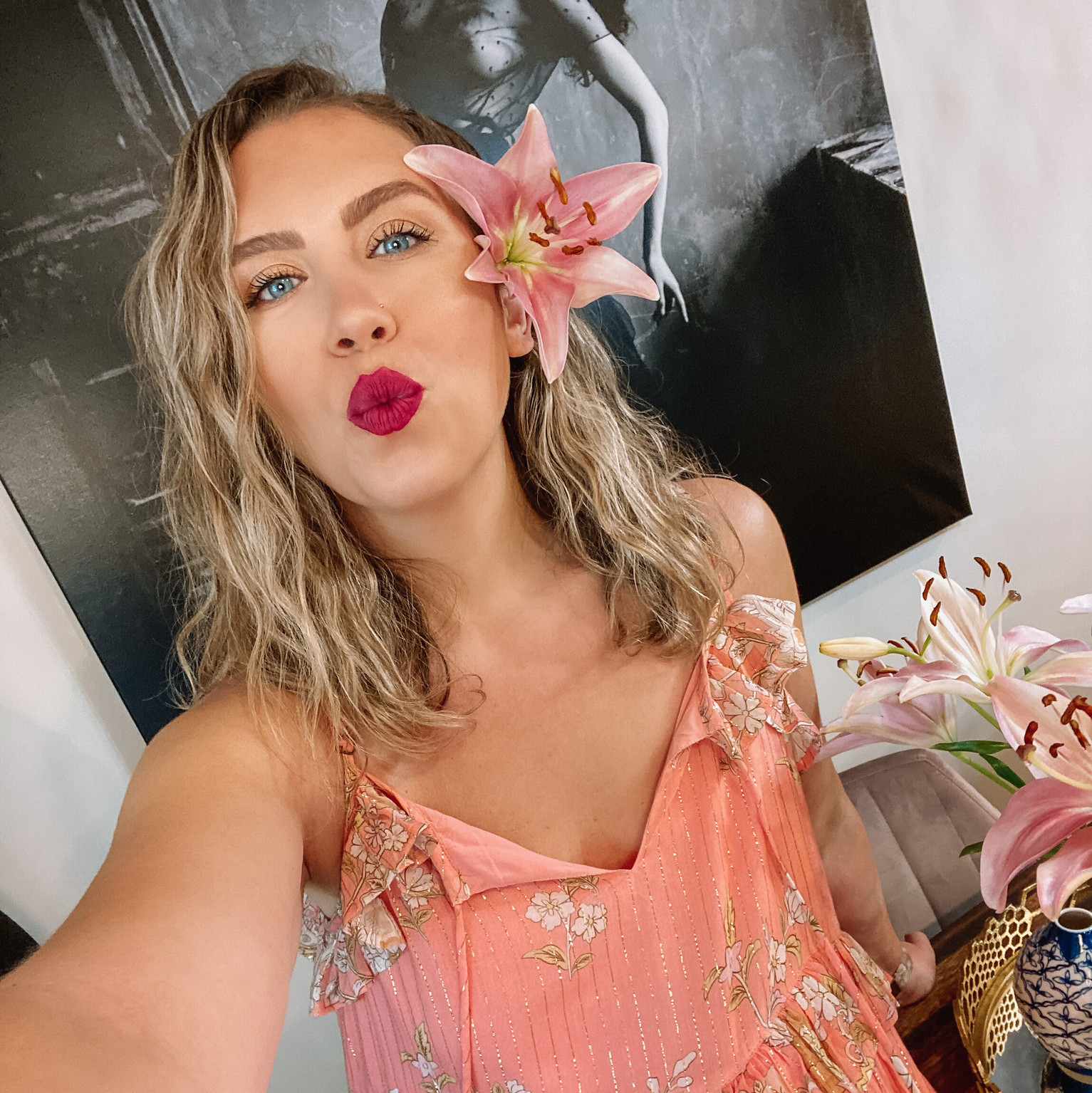 If only my apartment looked this clean right now..

I actually had to restrain myself from getting a f

I slightly changed the shape of my eyebrows last n

White After Labor Day...YAY or NAY?

While I wish I could tell you exactly where to buy

The most perfect dress that ever existed 🖤 : Lo

Fall Patio Season has started ☀️🍁 : And I b

She dresses like me and drives me crazy, but I wou

Blonde Jackie is BACK and she’s ready to have so